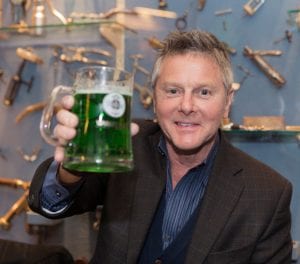 Although the Student Prince/Fort Cafe is technically a German restaurant, they certainly know how to celebrate St.Patrick’s Day including two days of Mummers performances, green beer, and a special Irish menu including a traditional Corned Beef & Cabbage feast with all the fixings for $22.95 per person. 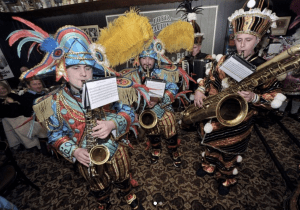 Celebrating their 99th year, the Aqua String Band has entertained countless people and has celebrated its unique Philadelphia Mummers tradition across the globe. The Aqua String Band was organized on April 2, 1920, by Elmer W. Leyrer and Fred J. Kesel, Sr. with the intent of participating in the annual Philadelphia Mummers’ New Year’s Parade. Enjoy a unique blend of banjos, saxophones, accordions, and percussion, all dressed in breathtaking one-of-a-kind costumes as Aqua recreates the sights, sounds, and spirit of Philadelphia’s historic New Year’s Day Parade.

Don’t miss them as they hit the downtown streets for their annual Pub Crawl on Friday, March 15th. Some tickets are still available, please contact Brian Elliott to purchase yours, ya gotta know someone who knows him.

Bo Fitz and the Yankcelt Band at Theodore’s 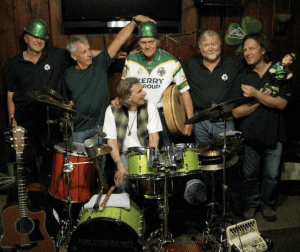 Although it has been rumored for several years, The YankCelt Band is making it official: the 2016 schedule of shows has been dubbed “#26… The Farewell Tour”. It will mark the last time the band will be performing as a group.

Twenty-Six years ago, Bo Fitzgerald, Jeff Sullivan, Craig Eastman and Guy Devito began performing as Bo Fitz & The YankCelt Band. Over the years, Billy Klock and Mixie Clark were invited to join the ensemble. The YankCelt band has become an annual tradition in the Valley every March since 1990.

Become a part of the local legends’ last performances as they good-bye and thank you to all their loyal fans and friends.

Eat, Drink, and be Irish: St.Patrick’s Day at MGM Springfield 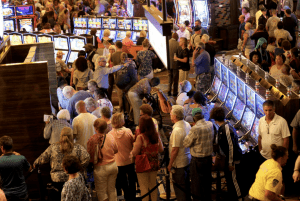 Join MGM Springfield in the Lobby Bar on March 15 for a Study Hall with an Irish twist. Sit back and enjoy our carefully crafted St. Patrick’s Day-themed cocktail while listening to The Kings Duo perform some music with a St. Patrick’s Day spin.

What goes better with St. Patty’s day than beer? And at TAP Sport Bar we know a thing or two about beer, and we also know that on this special holiday it better be green! Enjoy your holiday ale with the sounds of live music brought to you on March 15 by the Swinging Shillelaghs and in March 16 by the Kings.

Be prepared for MGM Springfield to be taken over by one of the oldest folk festivals in the country. Join them on March 15, between 8pm and 9pm as The Mummers and Aqua String Band dance their way through the casino.

Be Brave and Shave

Be Brave & Shave! March. 16th from 11am-3pm at The Armory. Be a hero for kids with cancer! Join this St. Baldrick’s event, and whether you decide to shave your head, volunteer, or donate, we hope you’ll be a part of the excitement! The St. Baldrick’s Foundation is a volunteer-powered charity that funds more in childhood cancer research grants than any organization except the U.S. government. Get involved and you’ll be giving hope to infants, children, teens and young adults fighting childhood cancers!

It’s all in the details. #BeDowntownSpringfield

Good news. Starbucks at Monarch Place will be open

This video has been viewed by MILLIONS. We figured

Check out some downtown projects that are still pr