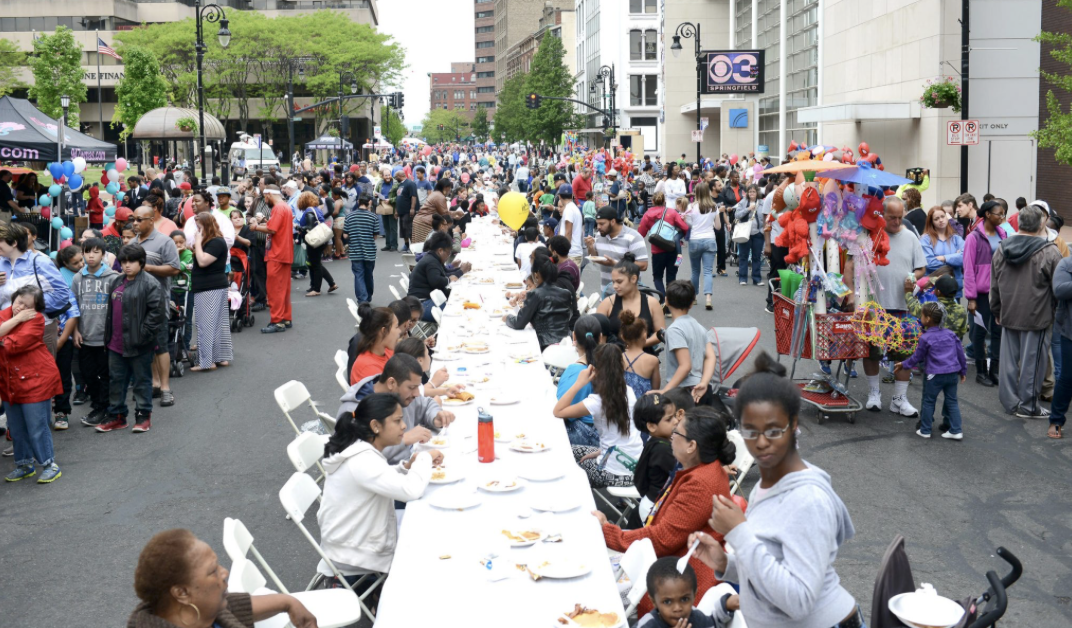 The World’s Largest Pancake Breakfast is a great way to meet neighbors and friends as the community sits down at Springfield’s breakfast table in celebration of the city’s May 14, 1636 founding. The menu includes hot, hearty pancakes, coffee, juice and milk, and lots of local talent.

In 1976, Springfield was celebrating the country’s bicentennial and decided to throw a breakfast on Main Street. Ten years later, when the city was celebrating it’s 350th anniversary, another breakfast bash was thrown and there began the friendly competition with Battle Creek, Michigan, the self-proclaimed “Cereal Capital.”

Each year, the two communities battled it out for the “World’s Largest Breakfast” title. First, the focus was on the length of the breakfast table. Springfield set-up a table stretching 2,500 feet on which they dished out 24,000 servings. A month later, the folks in Battle Creek out did the Springfield breakfast by 200 feet of table and 26,787 servings.

In 1987, Springfield switched to cereal and out did Battle Creek with a 3,700- foot table and 27,067 servings of cereal. The table stretched ten city blocks down Main Street, from Gridiron Street to Union Street. Before the “Breakfast Bowl” trophy could be engraved, Battle Creek assembled their own 3,700 foot table and served 30,413 servings. Springfield claimed fowl for their competitor’s table was not in a straight line. From then on, the table got shorter and the focus was on servings until recent years when Battle Creek decided not to release the number of bowls they dished out.

The “World’s Largest Pancake Breakfast” made the move from Main Street to the Eastfield Mall parking lot in 2005 and 2006. The cooking tents and two entertainment areas were strategically placed and then surrounded by volunteers serving coffee, milk and juice. After the hot and hearty breakfast, participants moved in doors for shopping, movies and more.