Spring is Here! Check Out The Murals in Downtown

In 2019, the Fresh Paint Mural Event took over downtown for a two week event…

A total of 9 murals were painted through out downtown.

We have the perfect idea to take advantage of this nice weather! Take a self guided tour of Springfield’s very own Fresh Paint Murals here in downtown…. 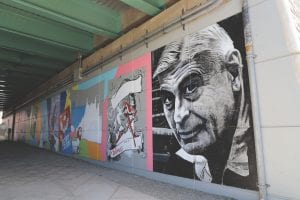 ARTIST: JOHN SIMPSON – “Dr. Seuss was born a street away at the Howard St. Armory. That’s why I painted this mural. I’m trying to show the impact that the City of Springfield might have had on his inspiration. His father was a Superintendent of Parks at the Forest Park Zoo, so I also have an image of the Fairfield Street House which is where he grew up and which is right next to Forest Park. The 500 Hats of Bartholomew Cubbins relates to the Howard Street Armory. There’s castles in it that remind me of the Armory. I also think Loring Street might have had some impact on his coming up with the Lorax. Dr. Seuss’s grandparents owned a Swiss bakery on the corner of Main and Howard Street. The smell of the gas plant across the street was noxious. They made these wonderful pies but the overwhelming smell of the toxic plant might have led Dr. Seuss to a consciousness about pollution and the environment.” 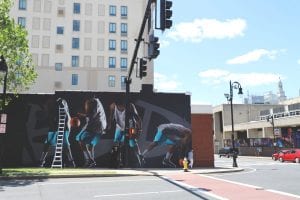 Artist: Damien Mitchell – ““It’s been awesome to paint this mural here. Travis’s cousin Jay is an artist and come by to lend a hand almost every day It seems that it’s worked like a place for people to meet each other and develop connections and a sense of common understanding.”

ARTIST: NERO – “It’s great working on street, and it’s always a challenge. You’re going to run into some pretty interesting people and you’ll have stories to tell for the rest of your life. I love doing flowers, and I thought to myself that in this neighborhood, flowers would bring some tranquil, positive vibes. And so far, so good. I just wanted to do something that was easy on the eyes and make people smile. And I’ve gotten a lot of good feedback from people loving the flowers. I’m glad to be a part of Springfield’s first mural festival – hopefully the first of many.” 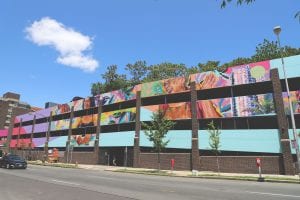 ARTIST: GOODSPACE MURALS – “The mural is based on community conversations that we had with residents in the Chestnut Towers community room. We also had a photoshoot of the residents so we could incorporate them into the design. From those conversations we just got the sense of how much of a home this place is, more so than just an apartment complex, or Section 8 housing, or downtown housing. This is a community that takes care of each other. And since so many of the residents are Puerto Rican, an important theme is their pride in being Puerto Rican. They’re really proud of this space. And, we’ve been made to feel so welcome and at home, and people have shared so much with us. That’s what allowed us to create a mural this big, this fast. The way we have been embraced by this community has been a dream for us.” 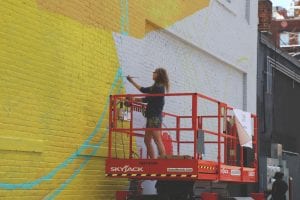 ARTIST: KIM CARLINO – “I work with geometric abstraction and improvisation. I wanted to do something like this in Springfield because I wanted to bring a sense of color, vibrancy, and playfulness. This mural is one big riff on itself. I start from one place and then all the other elements develop in relation to the one before. When I have been painting, everybody wants to come up to me and talk to me about their experience with art and creativity, and that’s exactly what this mural is about. It’s a celebration of imagination. And I think that’s the power of an abstract mural – it can become different things to each person.” 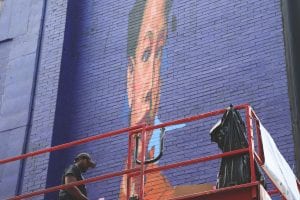 ARTIST: ANDRAE AND PRIYA GREEN – “Andrae and I are married and individually we’re both painters. Our backgrounds and our wheelhouse is as studio fine artists, so we normally work on canvasses. This is the first time we’ve been able to do a mural where we can do whatever design we wanted. Both Andrae and I live in Springfield, so being part of the mural festival is really important to us. We’re raising our son in the city and really happy to contribute to the city in this positive way.” 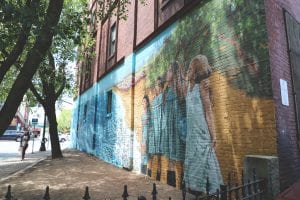 ARTIST: Colectivo Morivivi – “The two murals will dialogue with each other and try to serve as windows into the two parts of Puerto Rico: the diaspora and those who still live in Puerto Rico. On Taylor Street, you can see a fort at the very beginning, the city, and mangrove and then three young girls that gaze in different directions, and one that looks at the spectator. In the water there will be a message that blends in with the shapes of the water: “Ellos se van con el éxodo aunque no se quieren ir” which means “They leave with the exodus although they don’t really want to”.

Beast in the Paint by Wane One, New York City, NY – 1 Columbus Center 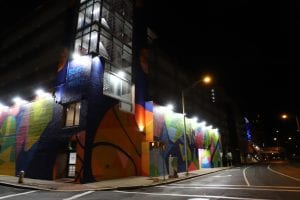 ARTIST: RYAN MURRAY “Like all other forms of street art, stencils are confrontational in nature and hard to look away from; and thus, the subject matter must be equally unflinching. In most of my work I concern myself with abandoned buildings, streets, and the under-representation of mental health issues in African-American communities, using both autobiographical and pop culture elements — at times revealing hidden beauty and at other times unearthing unsettling but important conversations. But for this mural, since it is in Union Station, I focused on Springfield’s history as a stop on the Underground Railroad. I felt that this was an important topic because as Springfield’s historic landmarks get torn down and replaced with new developments, the importance of its history and people must not be forgotten.”

Guys, we’re just a little obsessed with this pho

Today we're giving a shout out to downtown's newes

It’s Wednesday and you know what that means…

We love a good Mattoon Street capture. So much bea

Get your ice cream fixin at